What is Single Pair Ethernet?

As standardised by DIX and IEEE, Ethernet was based on a thick coaxial cable. By 1985, another development was underway. This time the Ethernet media was based on a thinner coaxial cable. Coaxial-based Ethernet systems are traditionally based on a bus topology, wherein every computer sends signals via a single bus cable. A major drawback of this topology is that when a cable fails, it disrupts the whole network. Also, troubleshooting a fault in this topology can take a while. As the number of computers connected to a single network continued to rise, these problems became more and more evident. In other words, the bus topology was just not scalable.

10BASE-T, an Ethernet standard that transmits at 10 Mbps over twisted wire pairs, was the first version of Ethernet to use a star topology. 10BASE-T Ethernet utilizes the two pairs of a four-pair unshielded twisted-pair cable. Both ends of the cable are terminated with an 8-pin RJ45 connector. A notable change in this technology is the use of switches instead of hubs. With a switched Ethernet network, full duplex communication is achieved. This means that the devices connected directly to the switch ports can receive and transmit data simultaneously on a single cable. This is in contrast to bus based ethernet which only allowed half-duplex mode. Half-duplex communication can still send or receive data over a single cable, but just not at the same time.

Increasing computing power in smaller form factors paved the way for emerging technologies in manufacturing such as the Industrial Internet of Things (IIoT) and Industry 4.0. With the emergence of these technologies there was a need for a new type of Ethernet technology (which fundamentally hadn’t changed for over 20 years). Single Pair Ethernet (SPE) was developed to provide two important advantages. The reducing size without reducing data rate, and providing a unified ethernet based replacement to the multitude of industrial field buses (like HART, CAN, LIN, and serial). 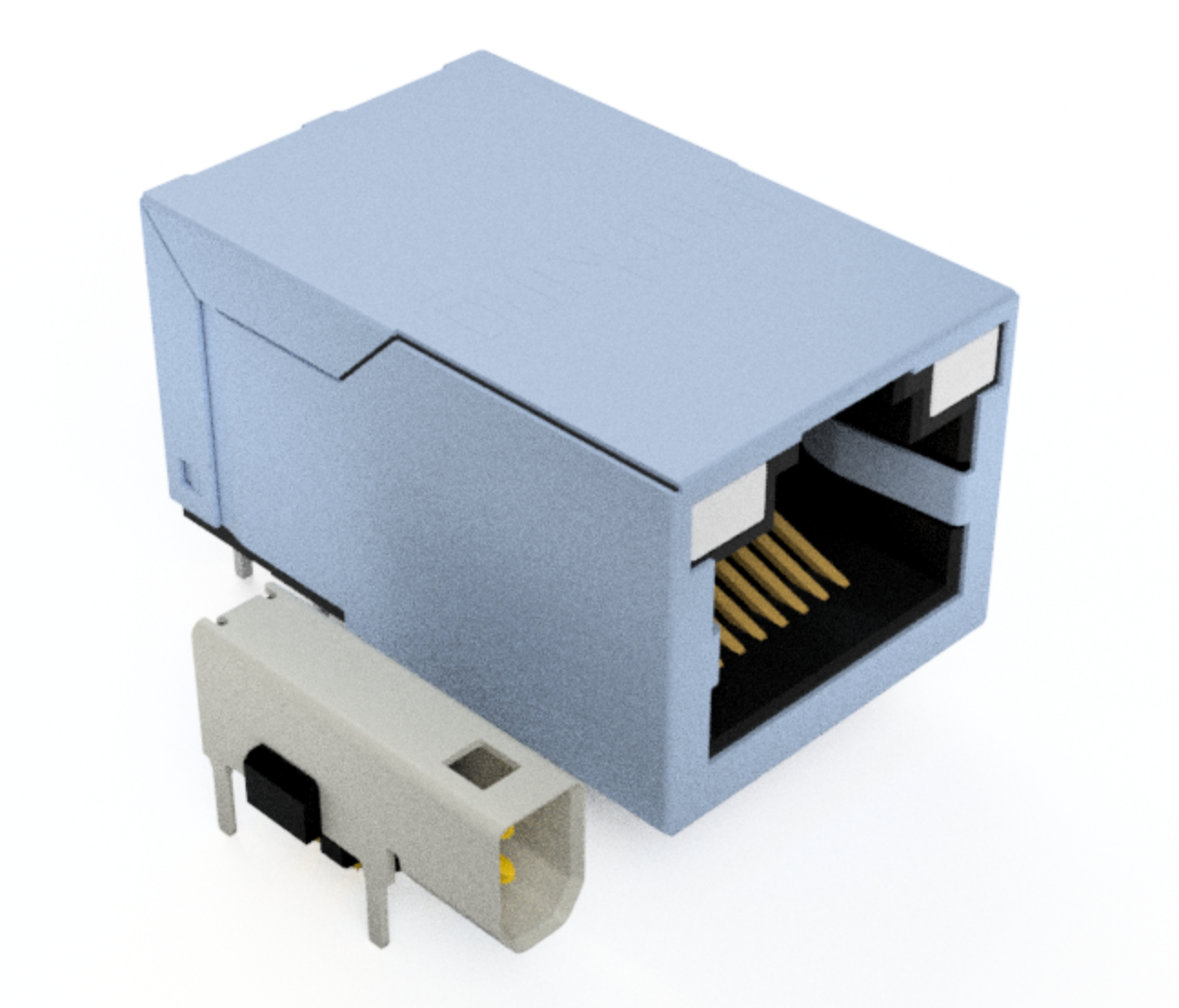 Using only one pair of twisted copper wire, Single Pair Ethernet (SPE) can currently transmit data at speeds up to 1 Gbps over short distances, with newer standards up to 25 Gbps currently in development. This is in contrast to traditional ethernet where two pairs (10/100M) or four pairs (1G and above) are needed for data transmission, and is achieved using more advanced signal processing techniques. SPE is also capable of delivering power to devices via SPoE (Single-Pair Power over Ethernet). 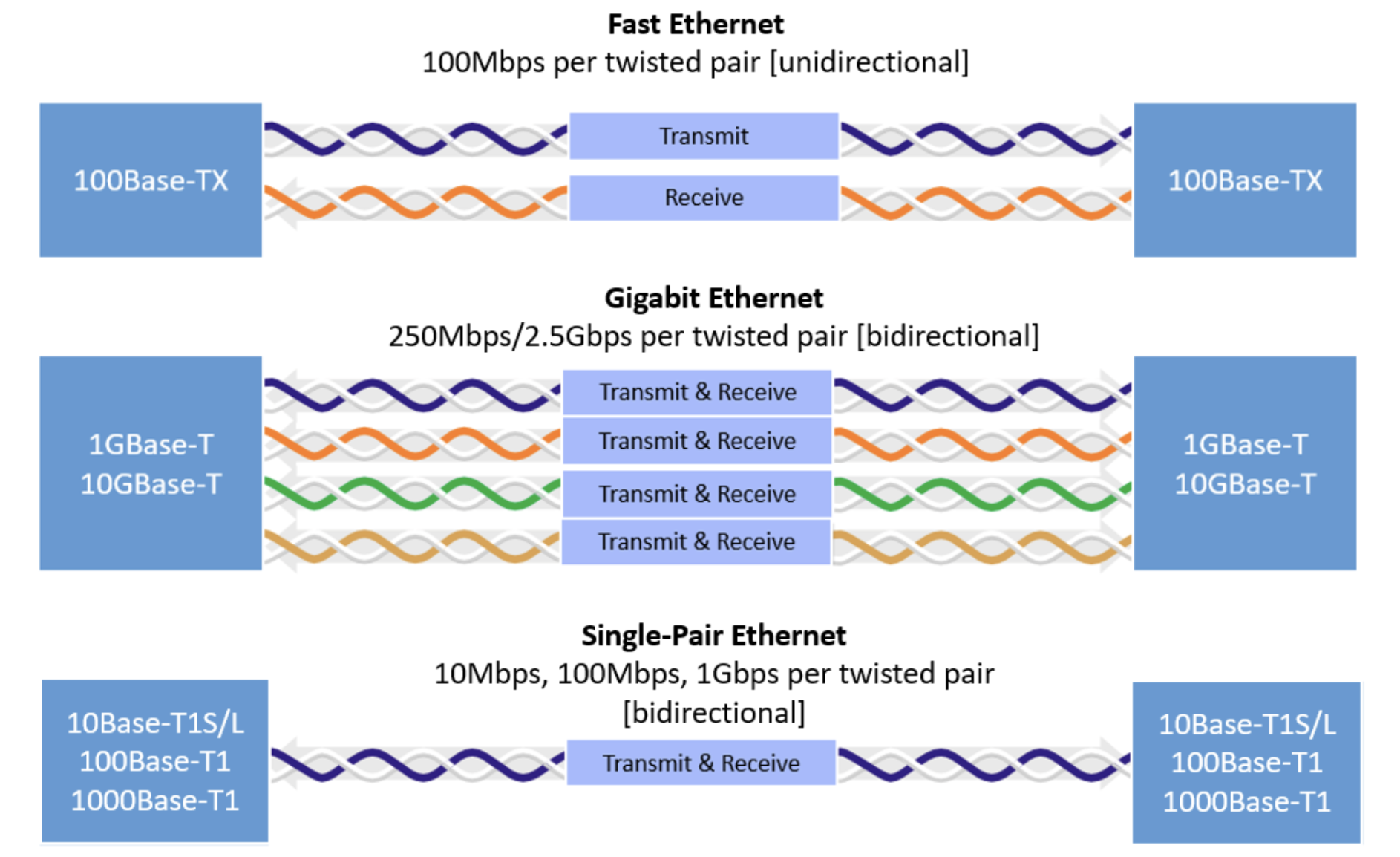 The use of SPE technology has already been around since 2011 to address automotive manufacturers’ increasing demands for Ethernet connectivity in vehicles.  SPE, by no means, does not intend to replace the current Ethernet infrastructure that is designed to support longer-distance transmission. SPE is well suited for systems that only require short cable runs and applications where space and weight are constrained.  The ability of SPE to deliver power through the dataline eliminates the need for batteries or additional power supplies in various connected devices including sensors, cameras,  actuators,  and security systems. In fact, SPE can reduce cabling requirements by as much as 75%. It is also quicker and easier to install than the traditional four-pair Ethernet. SPE delivers end-to-end communication, allowing various connected devices to operate under the same communication protocol.

What are the different Single Pair Ethernet Standards?

There are currently four different flavours of SPE to support different data rates and daisy-chain ability, with more standards currently in development to build on this. In all types of SPE, just one pair of wires, but transmission frequencies and PAM encoding is increased to facilitate the required data rate. Signals between two SPE electronic control units are transmitted simultaneously in both directions.

100BASE-T1 is a single pair Ethernet standard designed to support operation in automotive environments over a single balanced twisted pair. The cabling system for 100BASE-T1 consists of at least 15 meters of single balanced twisted-pair cabling, with up to four series connectors and two mating connectors with impedance in the range of 90 Ω to 110 Ω to support a data rate of 100 Mbits/sec in each direction simultaneously. 100BASE-T1 operates with a unique 4-bit to 3-bit, 3-bit to 2-ternary pair and three-level pulse amplitude modulation (PAM3) encoding scheme.

1000BASE-T1 is designed to operate over a single twisted-pair copper cable supporting an effective data rate of 1 Gbps in each direction simultaneously. In 1000BASE-T1 the key is the use of chipsets with a bandwidth up to 600 MHz, enabling 1 Gbps transmission speeds with just one pair of wires. It includes cable specifications for 15 m (unshielded) or 40 m (shielded) reach (what is the maximum practical length achievable with 1000BASE-T1?). The transmission is achieved using PAM3 at 750 MBd; 2250 bits per second, in both directions, hence 1Gbps each way.

The S in 10BASE-T1S stands for short-range. Developed as part of the IEEE 802.3cg standard, 10BASE-T1S enables true Ethernet-to-the-edge connectivity and addresses the needs of zonal architecture. One unique aspect of 10BASE-T1S compared to other automotive Ethernet technologies is the support for a multi-drop topology with all the nodes connected over the same unshielded twisted pair cable. This bus implementation provides an optimised BOM only requiring a single Ethernet PHY in each node, removing the need for a switch or star topology implementation associated with other technologies. The standard specifies that at least eight nodes are supported (it is possible to support many more), and bus lengths of up to 25 m is possible. This technology is a direct competitor to CANBus and others, providing ethernet compatible data structure in a field-friendly package.

10BASE-T1L (long-range) offers the possibility of using the existing 2-wire infrastructure over lengths of up to 1 km at a transmission speed of 10 Mbps. Above the bit transmission layer, 10BASE-T1L supports common Ethernet protocols such as PROFINET, Modbus, etc., as well as other bus systems, such as BACnet, KNX, and LON, that are commonly used in building management systems. 10BASE-T1L works with a balanced pair of conductors over a cable length of up to 1 km. However, in noisy industrial environments, a shielded cable is required. Some 10BASE-T1L switch chips have integrated diagnostics functions that check the signal quality over the cables, making it a very robust communication technology--even a mix-up of the wires does not pose an issue.

Single Pair Ethernet comprises a set of 802.3 standards much like the current Ethernet standard. The table below shows some of the most notable SPE standards. 100BASE-T1 maximum distance in the table below has been updated and is now around 40 meters.

The IEEE 802.3cg is especially beneficial to industrial automation applications. There are two IEEE  802.3cg standards: the short-range standard, 10BASE-T1S, and the long-range standard, 10BASE-T1L. Industry is moving toward smart technologies to make more energy efficient buildings where the incorporation of sensors are required. While four pair Ethernet is also capable, using single pair Ethernet means the amount of cabling required is significantly reduced. The sensors and IoT connected devices for a single building can number into the hundreds, even thousands. This makes the need for smaller cabling even greater. In industrial automation, many various technologies have been used to interconnect different devices such as Fieldbusses, EtherCAT, RS-485, UARTs. Each of these implements different software stacks and has its own hardware interface. The 10BASE-T1S, on the other hand, offers an all-Ethernet infrastructure that allows the use of the same protocol across all devices. It uses a multidrop topology where each node connects to a single cable. This topology eliminates the need to use switches. As a result, fewer cables are required.