For a long while, switch management has actually been possible on our hardware but it was not an easy task because it meant customising and uploading firmware manually. This was made ever harder by the fact that our boards are tiny, meaning connectors are fiddly and difficult to keep in place.

This has meant that the majority of our customers are using our products purely as unmanaged ethernet switches to provide basic ethernet backbones in embedded applications.

That is about to change though, with the release of the BotBlox ARIES (Active Register Interface for Ethernet Switches) Software, a new GUI that allows configuration the switch behaviour via a user friendly GUI. 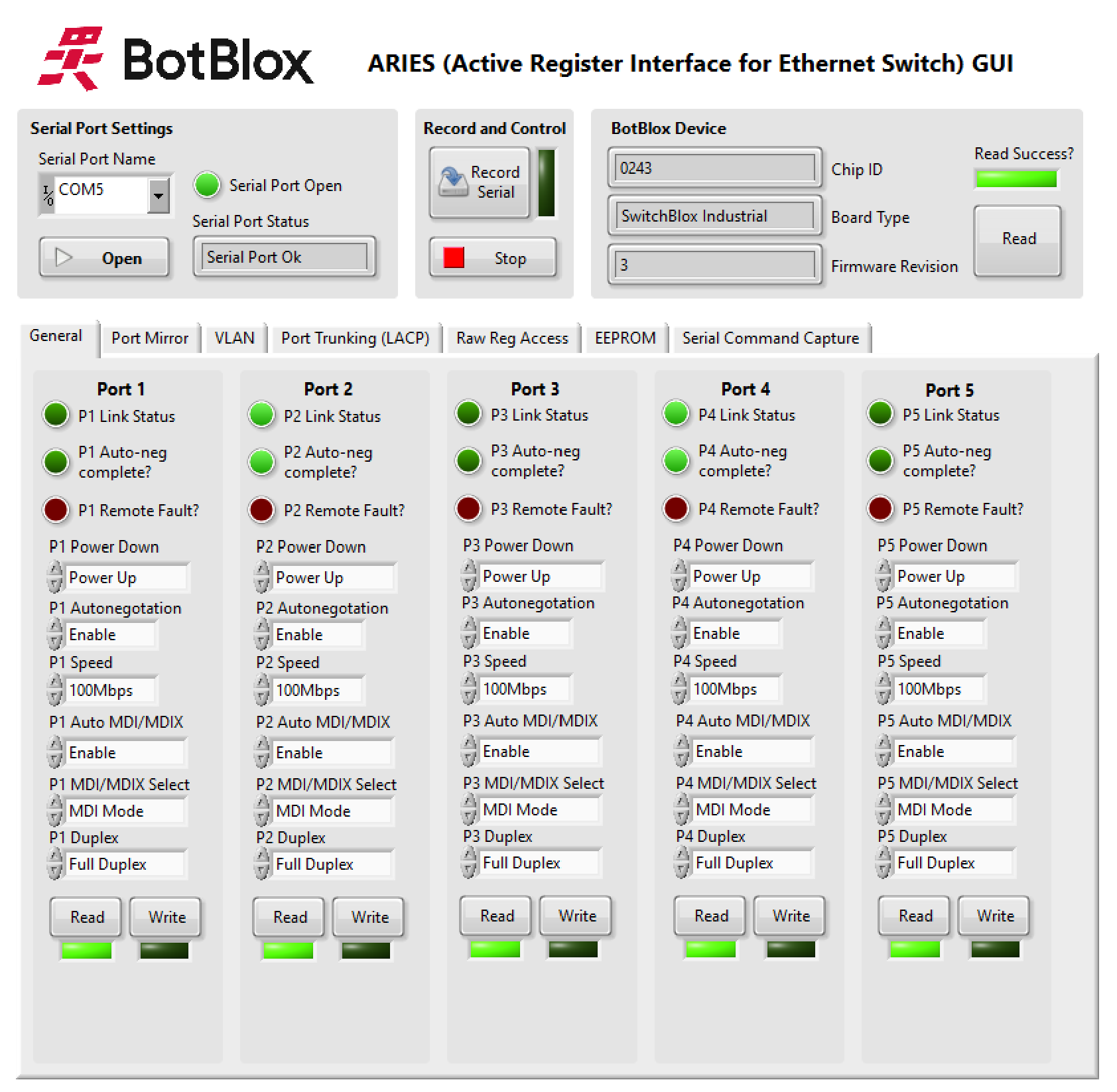 How does it work?

The GUI runs on the Windows machine, and generates the correct UART commands based on the user input selected. This requires the use of an external USB to UART converter to connect between the BotBlox device and the computer, but such converters are ubiquitous and cheap.

In many cases, our customers will want to control and configure our hardware with an embedded PC (like a Raspberry Pi), rather than with a desktop. To support this, the ARIES software can run in a command record mode, where the serial commands it sends/receives from the BotBlox board are stored and can be exported to a text file. The serial commands stored in this text can then be sent/received to/from the BotBlox board by any CLI based serial program running on the embedded device. 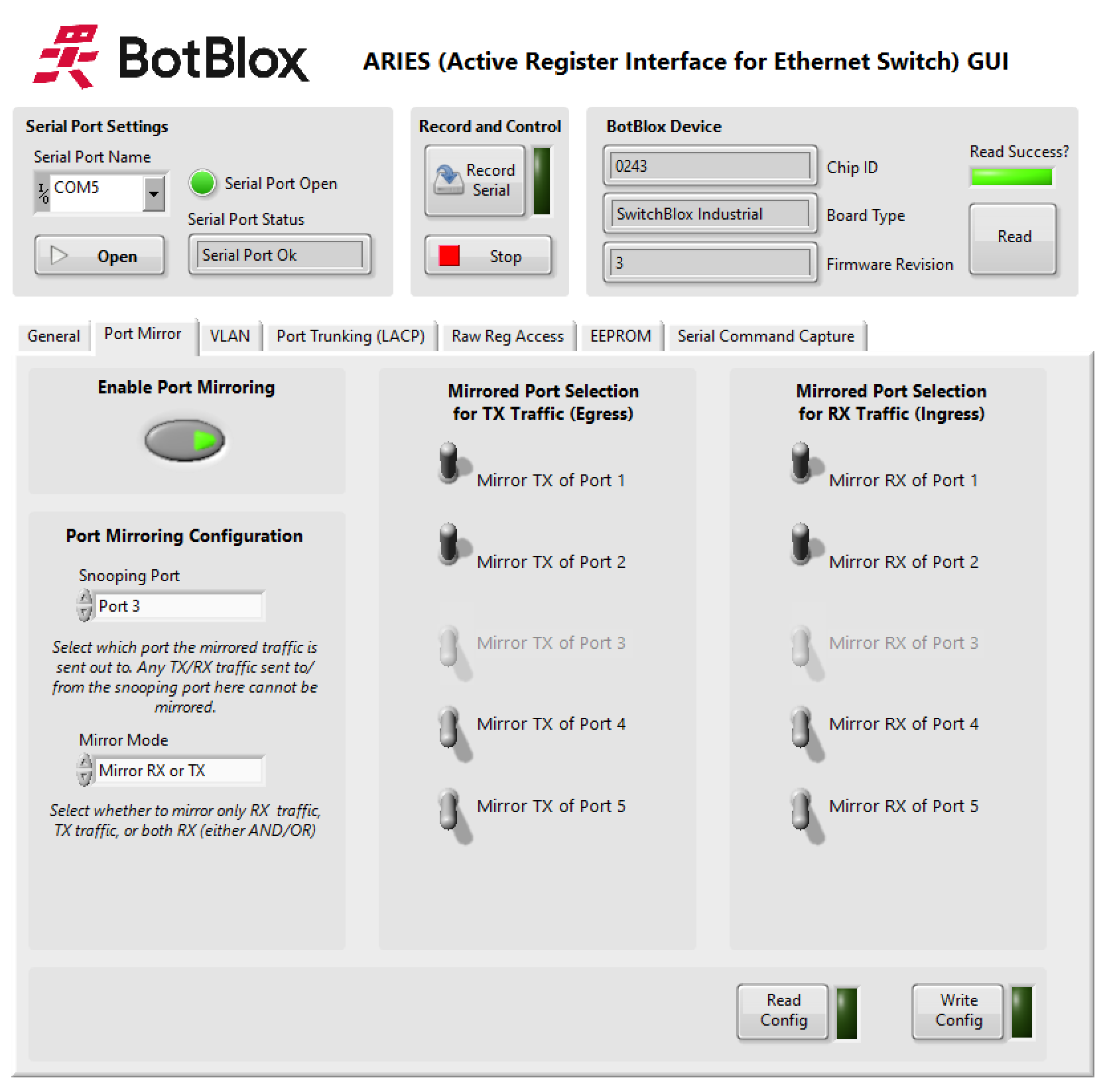 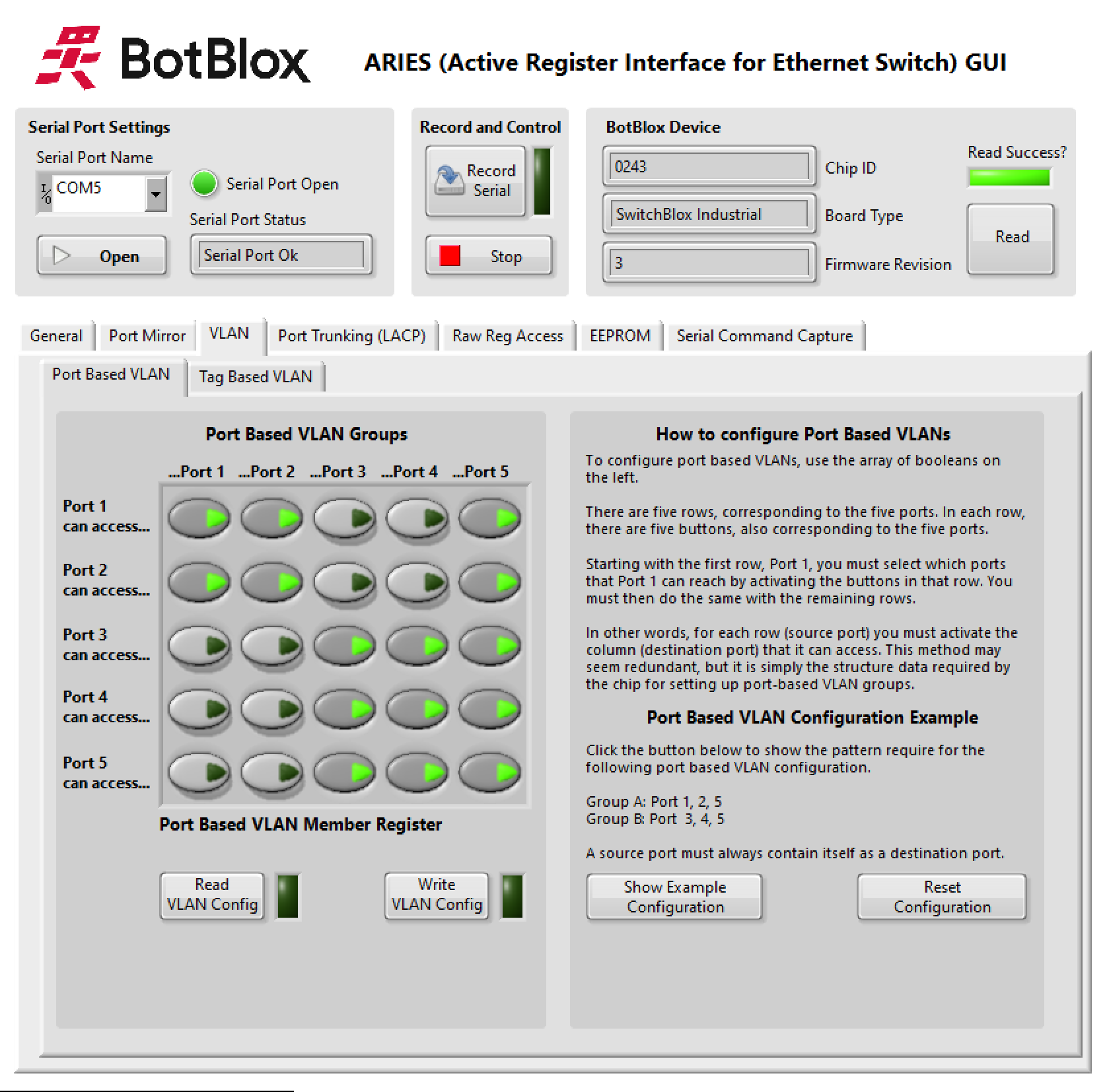 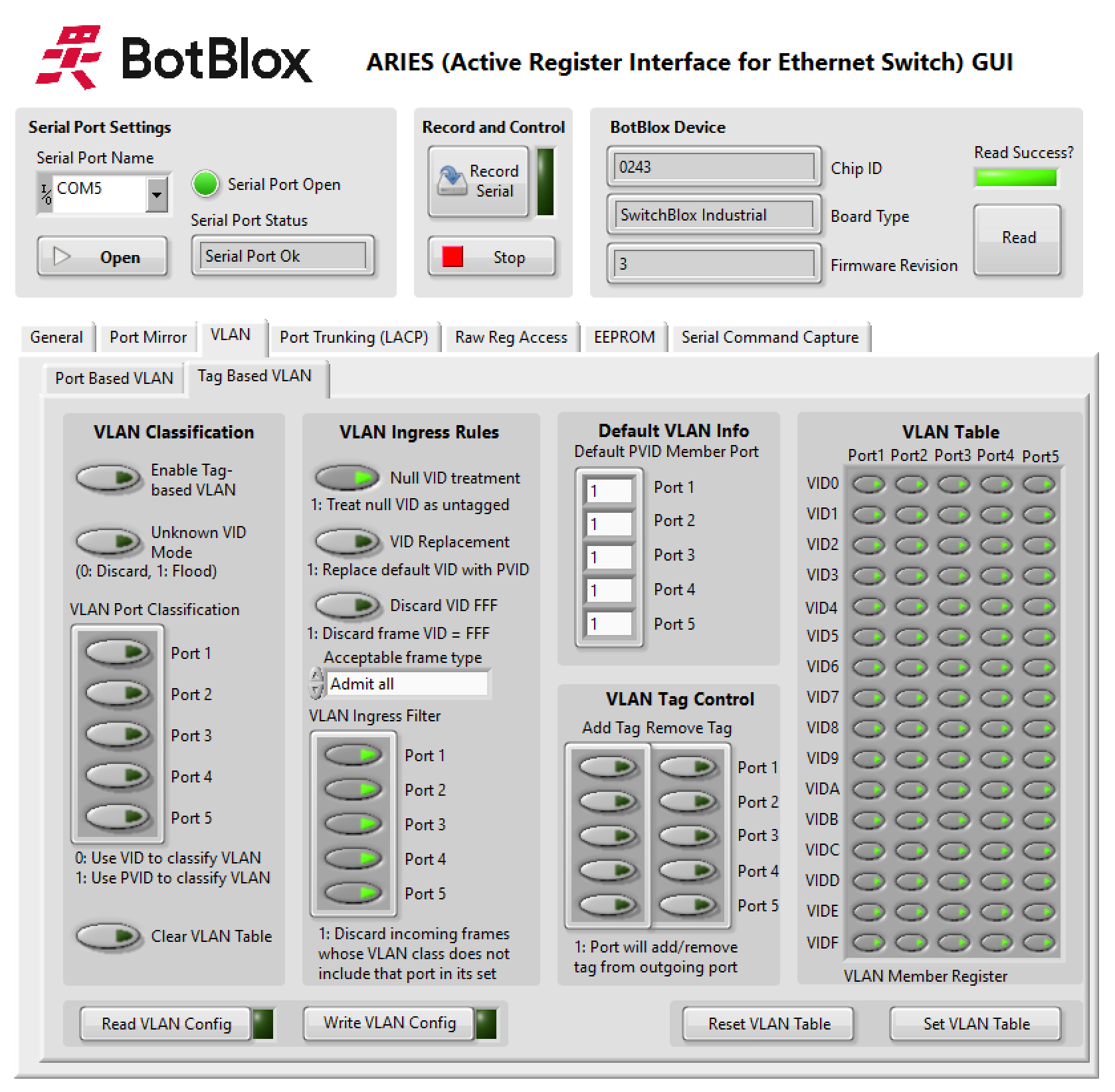 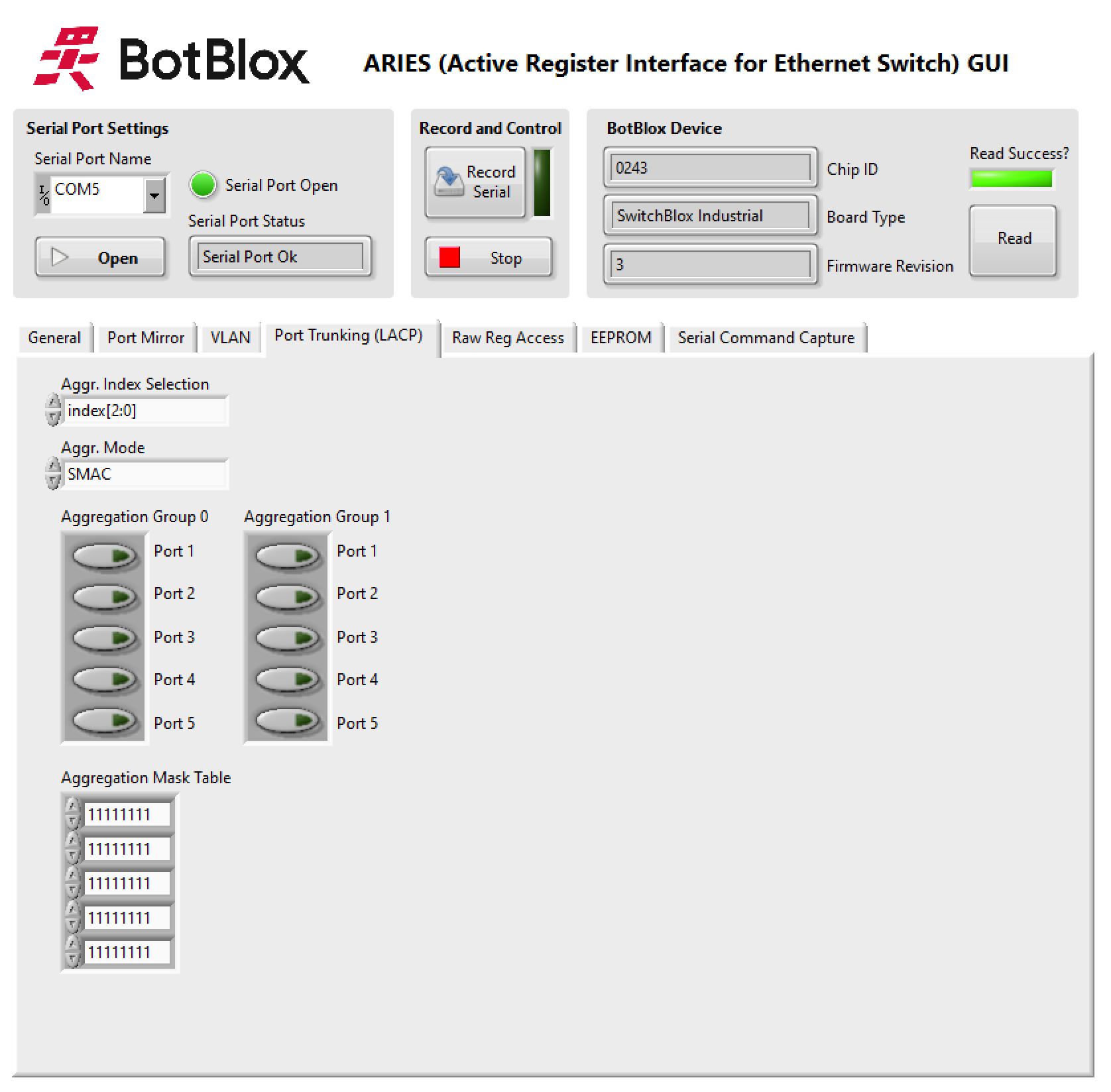 The first version of the ARIES software will only support SwitchBlox Industrial, but we will be rolling out support for more of our boards in future. The software will be released in mid January 2023

Support is only possible on our boards that contain a microcontroller, which rules out most of the Standard Series of our boards.  UbiSwitch will be the next board to be supported, which will allow a vastly expanded set of features including PTP, QoS, ToS, DiffServ and AVB/TSN.

A full software manual and tutorial will be released in due course. We would welcome your comments and feedbacks to help us define the next features for this software!